Don’t Get Tripped up over Toxic Employees

It can be difficult enough to manage work as it is, particularly if you regularly have to deal with testy customers. However, what if the issue is internal and you’re faced with “toxic employees?” If one is in your work environment or on your team, he or she can be identified by a bad attitude.  Unexpected, perhaps, is that many of these people don’t have a poor work ethic, or, at least, appear to work quickly and efficiently. They may be fast workers or especially productive-seeming in order to cover their tracks, but they are more likely costing the company enough money that this should be considered a problem and subsequently addressed.

If you suspect that someone working in your company may be a toxic worker, you need to look into the issue. It may take time and resources to determine, but it will be better for you, your other employees, and your business in the long run. If left unchecked, these people could potentially “lie or steal or exhibit other kinds of illegal or unethical behavior.” More likely, and less intense, they could “be a bully, or incompetent, or just plain clueless about how to get along in an office.” In any case, these are all problematic for you and for business. This employee will rarely contain the negative effects within themselves alone and can “infect” others, sharing a bad attitude or distracting people around them which ultimately impacts a company’s production and performance.

Perhaps surprisingly, there can be ways to determine, during the hiring process, if the individual is prone to toxic habits. Studies have been conducted to assess the kinds of traits that these people may exhibit that could serve as tells (and warning lights) before they have the chance to be introduced into the company environment. “The data includes information on how candidates assessed their own skills, how well they actually performed those skills, and how well they performed at their jobs if they ended up being hired.” Though job performance after the fact is typically monitored, few employers think of candidate’s assessment of their own skills in terms of how that assessment may negatively affect business. Rather, most tend to look at these with a framework of “what can this person do to boost our success?” While this is also obviously important for any given company, it will not weed out those who could do more harm than good once they are admitted work within. 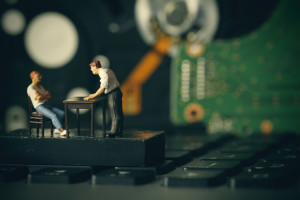 One such tell is if a potential hire is especially overconfident, which can be judged during the interview process. For example, if they can provide examples of their previous work, do these samples match up to how he or she describes the quality? Or, if they stress computer or typing abilities, a few simple questions or tests by the interviewer can determine how the candidate’s skills really rate. Another determinant is how much he or she seems to think and care about others, particularly within the work environment. Questions to help toward this answer may fall along the lines of “how do you work with others,” “what is your opinion on collaboration,” and “would you call yourself a team player.” If they don’t seem to give much thought to the other people in the office, it could be an indication of future toxic behaviors.

Very interesting is the significance of answers to a question like “do you think rules should ever be broken.” Most good employees will admit that rules sometimes can be bent if there is a real need, if there is no other way around the situation, or if it is really the best thing to do. However, potentially toxic hires are more likely to insist that rules within the company should never be broken, perhaps because they are trying to appear perfectly honorable despite less desirable habits they could later display.

Despite this, you can’t always identify an individual who may be problematic before hiring. In that case, there should be a general awareness among management of what to look for to uproot any toxic behaviors as they may or may not happen within the company. As mentioned above, they can seem productive within their work, which can make it difficult to identify them unless they are caught in the midst of an incident, such as verbal abuse or bullying via e-mail. An indication within the workforce might be someone who seems to be quick to complete projects, but upon further examination, the quality of work is poor and doesn’t match up with their speed.

Managers have a lot on their minds even before toxic employees enter the picture. To make things a little easier so that heads of business can focus on making their workers the best that they can be, there’s the SKYLINE Financial Systems Module. In using this management and accounting tool, you can save time by utilizing automation to accomplish tasks that can otherwise drain the hours from your day. SKYLINE is able to streamline so much of the process that it makes managing properties and accounts easier than ever, giving you peace of mind and some extra time to better understand how your employees are functioning within the business.